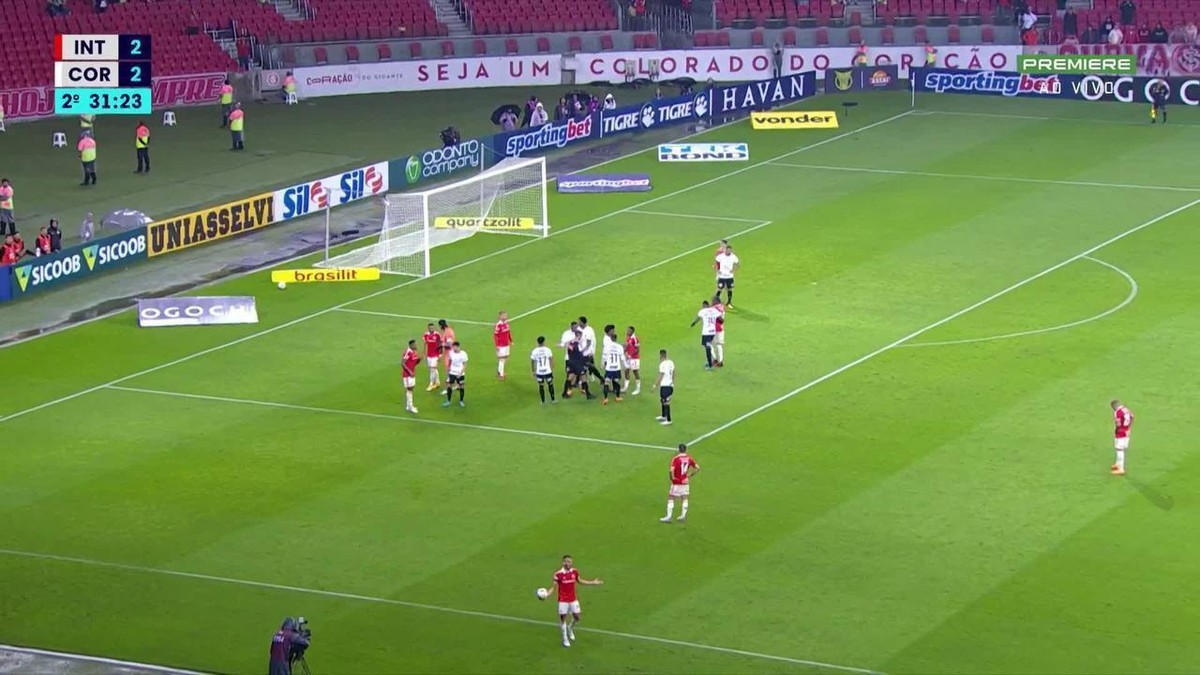 Edenilson, from Internacional, accused Portuguese right-back Rafael Ramos, from Corinthians, of racism during a match between the two teams, this Saturday, in Beira-Rio, in Brasileirão.

Edenilson told referee Bráulio da Silva Machado that he was called a monkey in the second half. Rafael Ramos denied the allegations and said “shick it, fuck it” in a football dispute with an opponent. Payments have been reported in the match summary. The actor also expressed himself on social media.

After the match, the Colorado player testified and registered the incident with the Civil Police.

Rafael Ramos was arrested in the act by police in Beira-Rio, but was released after filing a R $ 10,000 bond. Before leaving the stadium, he made a statement:

“I am here with a clear conscience and a clean conscience to explain what happened. It was a misunderstanding between me and Edenilson. At the end of the game I was with him and we talked calmly, where I explained what had happened. He explained what he really understood, which is not true. I explained the truth of what I said. That is what happened. We had a quiet conversation. He showed fear of pretending to be a liar, and I said he was not a liar, he just got bad words. We shook hands and I wished him well, ”he announced.

Colorado football vice-president Emílio Papaleo Zin also issued a statement in the Beira-Rio mixed area, without answering questions from reporters. He confirmed that Rafael Ramos went to Inter’s locker room to talk to Edenilson after the match, as revealed by Corinthians football director Roberto de Andrade.

– The athlete went to Inter’s changing room, they talked. But the fact is that we believe, regardless of the other side’s statements. We sympathize with the athlete and support Edenilson in any of his attitudes. Inter does not agree with and does not agree with racism and is on the side of Edenilson and shows solidarity with whatever is needed – the official said.

“Once again, the unfortunate case of racism has been recorded in national football. This time, at home, against a player from the national team. International. In this Saturday’s match (05/14), for the Brazilian championship, Edenilson reports that he was plagued by racist scandals by Rafael Ramos, an athlete Corinthians.

It is unacceptable that this kind of reality still exists in 2022, there is no room for racism in our society. The People’s Club insists it condemns any act of hatred and supports its athlete. “

See the official note from Corinthians

“THE Corinthians proves that, based on its 111-year history, it rejects and disapproves of racism.

Athlete Rafael Ramos was heard by the club and released a different version of the event in Beira-Rio, during the match against International for Brasileirão 2022. Shortly afterwards, being convinced that he had not spoken racist words, he insisted on Edenilson’s expression, in the locker room. International.

As a result of the complaint lodged by the Colorado athlete, the law requires the case to be considered open, followed by detention. Bail payments do not mean confession, allowing the athlete to defend himself freely in the investigation.

The club and the athlete will continue to co-operate with the authorities, ensuring that everything is clarified as soon as possible. “

The confusion started in the 30th minute of the second half. Edenilson and Rafael Ramos parted ways after leaving the right side of Inter’s attacking line-up. Then, the colorado player told referee Bráulio da Silva Machado.

Ramos was replaced in the second half and did not give an interview on the field trip. Edenilson also refused to talk as he made his way to the changing rooms in Beira-Rio.

In the broadcast photos of the First Show, it is impossible to discover any manifestation of Rafael Ramos during the confrontation with Edenilson.

The ge Corinthians podcast is available on the following platforms:

+ See: all about Corinthians in Globo, sportv and ge