Expo Japan was the epitome of orientation and celebration of oriental culture;

the organization celebrates an attendance record with 37,000 guests

The Japan 2022 exhibition ended last Sunday, June 19, with a feeling of longing for home. Hosted by ACEL – Associação Cultural e Esportiva de Londrina, with the excellent cooperation of more than 200 volunteers who transformed the baseball field into a gathering of thousands of people for one purpose: to preserve and spread Japanese culture.

In 2019, we had a 30% larger audience compared to 2018, with 35,000 people. By then it was the largest number of versions of the Japanese Exhibition. This year, just Saturday (18), we received 12 thousand people here at ACEL, a staggering number. Even on a rainy day, we crossed the public record with 37,000 guests in five days of the banquet “, celebrates Luciano Matsumoto, the event’s chief organizer.

On Sunday night, during the closing ceremony of the exhibition, Luciano Matsumoto highlighted and thanked the volunteer work of the organizing team for the event. “This work was built by our predecessors, who started more than 60 years ago with the ACEL Agricultural Exhibition, an event that spawned the Japanese Exhibition, and which today is considered one of the largest Japanese and Brazilian festivals.” 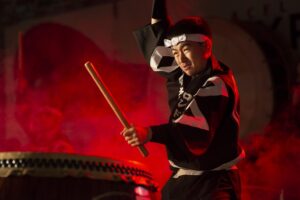 During the five-day festival, Expo Japan brought the most diverse aspects of oriental culture. The public enjoyed and appreciated Kpop along with his noisy teenage fans, the silent and meaningful ritual of the tea ceremony, the beauty of ikebana, the power of taikos, martial arts, the disrespect of cosplayer dancers.

The Japanese exhibition also made ACEL an opportunity to value smallholder farmers, an open environment for discussions on sustainability measures and innovation in the fields. The event welcomed the elderly and children from the public school system and on Saturday, celebrated Ireisai, a Buddhist festival in honor of immigrants.

In the year that the Nikkei community celebrates 114 years of Japanese immigration to Brazil, the resumption of events allowed the 2022 edition of the Japanese Exhibition to take place.

“From June 2019 to June 2022 there were three long wait years. It took 120 days to plan, work and volunteer. Always focused together, all our efforts were rewarded with the great presence of our audience,” says Luciano Matsumoto.

The event was sponsored by more than 30 sponsored companies; more than 50 positions sold by exhibitors from different parts of the country; 8 public service restaurants; more than 35 hours of cultural exhibitions; 30 invited art groups; 6 lectures on sustainability and innovation held during the 9th AgroInovatec; the presence of more than 300 children from public schools; more than 300 seniors also had their day celebrated at Expo Japan.

Yes, the Japanese Exhibition is already missing. Now is the time to wait for the 2023 edition!